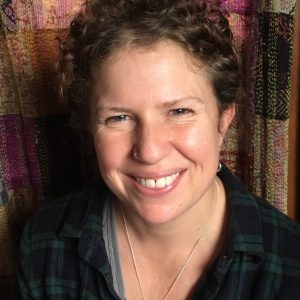 Cerian has always done some sort of active hobby, from surfing to belly-dancing, and first practised yoga in 2001 at university, but after having her daughter she struggled to find the time for anything more than walking the dog. Finally rediscovering yoga in 2013, her practice was hit-and-miss for a long time, but she knew that it was helping her to cope with life. Every time she stepped on the mat and set a sankalpa ( positive intention ) it was time for her, a challenge she could embrace. Every time she stepped off the mat she was more at peace than an hour before. It was her grounding space, even though she didn’t allow herself time there every week.

Following an episode of full-blown depression in 2018, she realised that she had to change something fundamental in her life. No more putting self-care at the bottom of the list. Yoga had to become as much a part of daily life as preparing the evening meal.

She left her job as a classroom teacher and signed up for Bristol School of Yoga’s 200 hour Ashtanga and Yin teacher training.

From her first days in the classroom, Cerian wanted to make languages accessible to all her students- and she still has this desire.  Her aim is to remove the fear that “yoga’s not for me because I’m not bendy enough/not strong enough/not thin enough”. Every body is a yoga body- every yoga practice is valid- every day on the mat is different.

Yin is a beautiful, calming, grounding practice which complements the yang aspects of other yoga styles. It works with the body’s fascia to deepen the range of movement, and it can allow you peace and space to relax your mind along with your body.

To book this class or make further enquiries contact the teacher: